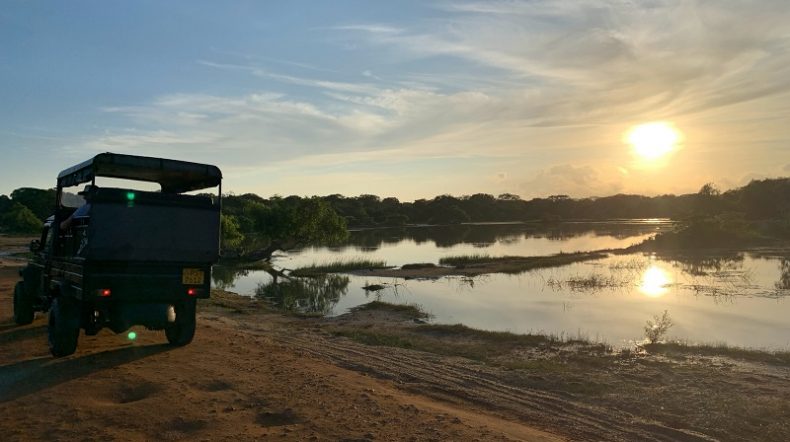 Wondering how to get from Colombo airport to Wilpattu national park? Sri Lanka, the beautiful island in the Indian Ocean, is the home of 26 national parks. The largest, covering around 1,100 square kilometers is Wilpattu National Park.

This area was designated as a sanctuary in 1905, and the status was elevated to a national park in 1938, which makes Wilpattu the oldest one.

The unique feature of Wilpattu are Willus, sand-rimmed lakes which seasonally fill by rainwater. Of the many such lakes and reservoirs only two are permanent.

Situated in the northwest coast’s dry lowlands, some 190 kilometers north from the capital Colombo, Wilpattu is renowned for its large population of leopards.

It is home of more than 30 mammalian species, of which most important, and classified as threatened, are endemic species of Sri Lankan elephant, sloth bear, spotted deer, and water buffalo.

Wilpatu also has rich populations of birds, among which stands out Sri Lankan junglefowl. Endemic species to Sri Lanka and the national bird of this island nation, a close relative of red junglefowl from which domesticated chicken originates.

Hiring a private taxi is the most convenient, fastest and the only way to travel directly to Wilpattu National Park from the Bandaranaike International Airport at Colombo.

With the ability to book departure from the airport at your own convenience you can embark on the trip to Wilpattu as soon as you arrive to Sri Lanka.

This 156 kilometers, three hours journey, you will spend in a pleasant atmosphere of an air-conditioned vehicle.

Private taxis also allow you to meet any particular requirements you might have for travel, such as a child or booster seats.

One of the transport accommodation characteristics which is often neglected by inexperienced travelers is the luggage space.

As opposed to public transportation, which has limited space, booking a private taxi gives you a choice of vehicle type which suits your needs for both spaces for passengers and luggage.

If you wish to rent a private taxi you will face a choice between many big and small companies.

One such is the T2 Travels Sri Lanka one of best travel agents in Sri Lanka, which can make all traveling arrangements for you, and gladly unburden you of the trouble of looking for a reliable Colombo airport transfers which is fulfilling your requirements.

If you wish to travel by train from the Bandaranaike International Airport you should brace yourself for a sort of an adventure.

First, you need to be aware that there is neither bus nor train direct line from Bandaranaike airport or Colombo connecting to Wilpattu National Park. You will need to travel to Anuradhapura, a city some 40 kilometers away from the national park.

To reach it you will first need to take a 1.4 kilometers stroll from Bandaranaike to Katunayake Airport Bus Station, where you can board a bus on the 187-E line heading for Colombo.

Trip to Anuradhapura will last between 3 and a half and 5 and a half hours, depending on the type of train and varying number of stops along the way.

After reaching Anuradhapura, your last leg of the trip will be a 45-50 minutes ride with a taxi to your ultimate destination.

Train duration is 7 to 9 hours and train cost is from around €17.

Transfer from Colombo Airport to Wilpattu National Park By Bus

Traveling from Colombo Airport To Wilpattu National Park is marginally less complicated by bus than by train. The first part of the trip, until reaching the Colombo Bastian Mawatha Bus Terminal, is the same.

At Bastian Mawatha, you can catch a direct bus for Anuradhapura. Line 57 bus departs from 19 times a day, from 0240 till 2230, on average every hour.

This leg of the trip will take around 5 hours and 15 minutes. Upon arriving at Anuradhapura, you will need to take a taxi for the final leg of the trip. After 45-50 minutes ride, you will arrive at Wilpattu National Park.